Our Friends In The West

North West Tonight, the wonderful and humble organ of regional news on BBC1 reported on the fact that Pete Best, “The 5th Beatle” is having a street named after him in Liverpool.

The new estate in West Derby will also have a street named Casbah Close, after the club that was half a mile away where the Beatles started their career.

You know how much I love our Scouse brethren, only in Liverpool would they name a street after someone who was NEARLY in the biggest band in the world, and a club that was QUITE CLOSE, not on the site, quite close some years ago.

And another thing……how many places in Liverpool did the Beatles start their career? Every street corner from L1 to L12 proclaims itself as “de place where it all started!”

In other Mersey themed news, it’s been a very short 7 months but happy birthday to a man I already consider to be a great friend, East Lancs legend Kev Seed is 25 again tomorrow. Nice one ace!

Posted by Greenie at 7:21 pm No comments:

Favourite moments from the News Of The World

Thank you for reading

I Want My MTV!

I’ve been getting to grips with news feeds and what have you on Firefox and in order to get music news about people who seem to be named after dangerous pets I’ve subscribed to MTV News.

When I got rid of Sky about 18 months ago I worked out that it had been a couple of years since I had watched MTV for music, and even then I recorded 120 Minutes at stupid o’clock in the morning to watch when I came in from work.

This was going to be a diatribe tredding a path followed a number of times about how they should drop the “M” but instead of that I got on You Tube and looked up some MTV that I loved.

I grew up watching MTV when it was by far the best channel on Astra and have narrowed down my 5 favourite things about good old MTV.

Davina was fit. She was funny, she was irreverent, she could hold her own against the wave of testosterone that was whichever Italian happened to be on with her at that time and she was fit!

She also had an amazing rock n roll back story which was eluded to much more on MTV than it ever has been since and this put her alongside the best MTV presenters who also walked the walk.

She also used to wear leather, tight leather, a lot!

Most of MTV’s alternative programming was great. Alternative Nation was a breath of fresh air, indie and leftfield music being treated like all the pop that was on during the day. 120 Minutes was the nearest thing to John Peel on the TV and the fact that this was MTV Europe meant that there was literally no way of knowing what was coming up next. Dirty Norwegian techno segueing with a series of on-screen idents (obviously in the infancy of on-screen graphics because you could time them loading the next ident on, it normally took 90 seconds to show the name of the artist, song, MTV strand, MTV show, etc) into Ride.

Then there was the Brothers Grunt, Liquid Television, Ren and Stimpy. TV that looked and felt like creative minds realised you can’t please all of the people all of the time and were actually trying to flex their minds. Superb stuff.

They’d stand in front of a green screen swaying with their arms behind their back, speaking in the pidgen-est of English, starting every sentence with “OK guys”. You know they’re speaking in English, you can make out the words, but the fact that every VJ had their own pattern of speech depending on which part of the continent they were from was brilliant and, personally, fostered feelings of European brotherhood.

The best thing about MTV Europe VJ’s, however, was that for a teenager going through the changes a teenager does, these slightly older girls with funky hair and tight clothes on was mesmerizing. My own personal favourite was Marijne Van Der Vlugt. I’m still a sucker for long brown hair, doe-eyes and faux coyness…….AND she was in a band! 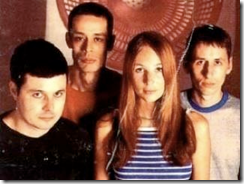 Before I really understood what tight rotation and playlists were I just thought that Pip Dann and VJ Ingo had amazing music taste which is why Swedish rockers Whale and French rapper MC Solaar would always be on in the afternoon. Could you imagine anyone in charge of any media outlet allowing people to see these videos during the day?

1. Most Wanted with Ray Cokes.

STILL the only TV show I made an effort to watch every single day.

It was like all the radio I loved at the time (and there is no higher compliment). Fun, loads of people involved, crammed with ideas, operating within it’s own boundaries, interactive without pleading for contact, happy to talk nonsense and include in-jokes because if the crew are enjoying it chances are the viewer is too! “Your input is our output”, “Cans of Bis”, “Club Bed” and all presided over by a bloke who was more than happy with the fact that this is all a bit crap which is why people genuinely loved the last great TV presenter Ray Cokes.

Fact : Youth TV viewers love watching blokes who are obviously in their late 30’s pissing about like a top uncle who talks to you like your on his level!

Here he is with Take That….who obviously adore him and will swear like troopers to fit in! (NB : Isn’t Robbie a knob?)

He’s now presenting the Belgian version of “James and Oz Get Smashed” – trufax!

Anyway, back to the plot, there may be no 120 Minutes any more but you can make your own because MTV put stuff on their website that doesn’t quite fit with “16, Pregnant and Spoilt”. Enjoy Little Scream presenting “Lamb”

Posted by Greenie at 5:31 pm No comments: